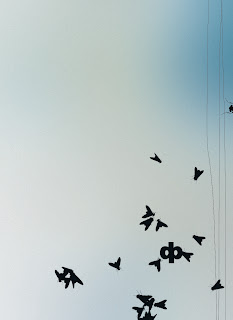 Scrotum Records (hode156) January 2012, Edition of 100 copies
Recorded live at The Lab, San Francisco on Sep 1, 2010 and originally intended to be released as a 4-way split of all artists performing that night (DP, Leticia Castaneda, Ryan Jencks and Gerritt Wittmer). The final release is a documentation of Dave's set only, a 3inch disk housed in a neat mini DVD case, presumably displaying the full set (well, at least audio-wise), totalling just under 20 minutes. I have no idea what the video part of this performance was like (assuming there was one regarding the title), but the audible part pretty much works by itself. Presented in a strong and powerful recording by Jim Haynes, the piece starts rather restrained. Asthmatic breath sounds and heartthrobs, an occasional whispering now and then, inhering a somehow uneasy feeling overall.
The more this set evolves, the sharper the exposure of human depravity, which runs like a common thread through the immense body of Phillips' work, comes to light. Besides the mandatory squeaking pigs and yapping dogs, the beforementioned breather slowly seems to be approaching the death's door, increasingly spewing and choking, accompanied by lovely, yet morbid piano sounds and audible sledgehammer blows, culminating in outbursts of noise and vicious, Fear-Of-God-ish vocal eruptions. Even without the video component, a thoroughly absorbing excursion (not only for Schimpfluch afficionados) and a genuine piece of Phillips in all of its obnoxious beauty.
Scrotum Records
Dave Phillips
Posted by fake dimensions at 2/03/2012 01:18:00 PM